It seems like vaping stores are popping up by popular demand on every corner, and many of the users are high school students. During 2017 and 2018, e-cigarette use skyrocketed among youth, leading the U.S. Surgeon General to call the use of these products among youth an epidemic in the United States.

Did you know that one-in-four of Georgia high school students reported that they have used e-cigarettes (26.1%; 120,000) according to a 2018 report published by the Georgia Department of Public Health? However, in Georgia it is against the law to purchase e-cigarette products for anyone under 18.

You may wonder, what is vaping? According to Georgia law, Vapor product means “any noncombustible product containing nicotine that employs a heating element, power source, electronic circuit, or other electronic, chemical, or mechanical means, regardless of shape or size, that can be used to produce vapor from nicotine in a solution or other form. The term ‘vapor product’ shall include any electronic cigare

Naturally, the rise in e-cigarette use among teenagers has garnered attention, especially with news reports showing JUUL, a popular e-cigarette brand, under fire for the company’s marketing strategies targeting teenagers with fruit flavored products. The medical community, as well as parents and school officials, are waking up to this oncoming epidemic.

The report showed that as high school students age, the use of e-cigarettes increases. (see diagram 2) This trend is concerning due to the nature of what is in the e-cigarettes, namely nicotine, marijuana and other drugs such as THC.

Most e-cigarettes contain nicotine, which has known health effects:

Additionally, e-cigarette aerosol is not harmless. It can contain harmful substances, including:

To further demonstrate concern, e-cigarettes are now more popular with student tobacco users than other nicotine products, such as cigarettes, smokeless (chewing) tobacco, hookahs and waterpipes. The only product with higher usage is cigars or cigarillos. The report states that more males than females are using e-cigarettes, and usage is higher in urban areas vs. rural areas. 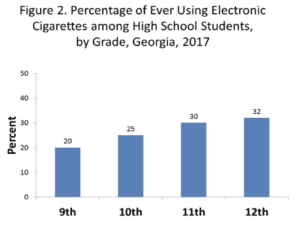 What motivated teens to begin using these products? Seventy-nine percent said it was because family or friends used them. In fact, e-cigarettes have been the most commonly used tobacco product among American youth since 2014 according to the CDC.

So where does this leave us? We are undoubtedly expecting increasing health issues as a result of e-cigarette usage as these teenagers grow older. Because tobacco use is the leading cause of preventable disease and death in the United States and because nearly all tobacco products contain nicotine, this epidemic cannot be ignored. Through law enforcement (prosecuting selling to teens), education, legal action (against manufacturers), government assistance from the FDA to establish stricter product standards (eliminating flavors) and other avenues, hopefully middle and high schoolers can be protected from what could be the greatest epidemic of their generation.

If you know of teenagers or anyone experiencing health issues as a result of using e-cigarettes, talk to our experienced attorneys at Friedman & Martin, specializing in personal injury law. We offer a free consultation visit or you can call 912-232-8500 or visit www.savinjurylaw.com today. We are waiting to help you.